Giants: Citizen Kabuto was a favourite at our LAN parties for a long time.  It’s an interesting game;  predominantly a single-player game it had a rudimentary multiplayer tacked-on, seemingly as an afterthought.

That meant multiplayer was a massive sand-box to play in with very little thought to balance.

Hence, it was totally awesome.

The game had three sides;  The Mechs, cockney-voiced technologists; The Sirens, scantily-clad magic-users and Kabuto, a massive giant with an even more massive appetite.  While there could only be one Kabuto all the other players would pick one of the two other sides and then everyone would fight.

The gameplay was pretty simple.  Everyone was on the same island with each having a ‘base’ at a separate corner.  The centre of the island had the local wild-life and natives (Smarties) in it and by capturing them and putting them to work you’d develop new technology.

And that was it.  Here’s an island.  There are no real victory conditions.  Have at it!

As I mentioned before balance was pretty rudimentary.  Everyone was better at moving than Kabuto; the Mech’s had jetpacks and the Sirens could teleport.  Everyone had ranged attacks and Kabuto didn’t.  Everyone had ways to hide / defend themselves and Kabuto didn’t.  The only way Kabuto could heal was to laboriously hunt ‘cows’ and eat them.  And finally, there really wasn’t much to progress with as Kabuto.  Everyone else would get better bases, guns and abilities as the game went on but he didn’t.

This resulted in no-one wanting to play Kabuto.  He’d get killed all the time, didn’t have much to do and often he’d be left fumbling around trying to catch people who were way more agile than him.

But all these problems were solved by the simple method of being really, really evil.  In fact, a lot of fun could be had by basically pretending you were a B-Movie serial killer.

Eating things was the only way Kabuto could get health back which normally meant grabbing cows as you ran about the levels.  But you could eat other things as well, including the other players.  Evil, but low-level evil.

Once you’d grab someone, they were helpless but weren’t dead.  You could run around for a while carting them around and only eat them at the most opportune / most humiliating moment.

I used to like idyllic trips to the beach (the graphics were amazing for back then), finding a quiet spot before tucking into my packed lunch.

You could impale them on the spikes covering Kabuto’s body too and the game allowed you to grab a meal off of your body when you liked.  Kind of a like a 30 metre reptilian Mr Twit.

I’m The Pitcher in this Relationship

Of course, once you’d grabbed someone you didn’t need to eat them at all.  While Kabuto didn’t have any in-built ranged attacks you could lob cows or grabbed players around as much as you liked.  There was some crude physics so it was a bit tricky but throwing a player you’d grabbed into another player (killing both in a fountain of blood) was brilliant;  especially if you timed it so the target had just landed after “escaping” you.

You could use these improvised baseballs for all sorts of utility too;  killing Smarties before they could be abducted;  blowing up the turrets and defenses people had constructed or smashing Mech bombers out of the sky.

It was only polite to thank the person you just lobbed for their help in destroying the expensive kit that would have otherwise been out of your reach.

Killing people, while fun, didn’t do much but slow them down.  They’d respawn in their base a few seconds later and come flying / teleporting straight back into you.  So you wanted to kill them in the most time-consuming way possible.

After messing around with a few methods my favourite by far was throwing people far out to sea.  They’d be helpless for the entire duration of the throw and if you angled it right they’d get some SERIOUS air-time. 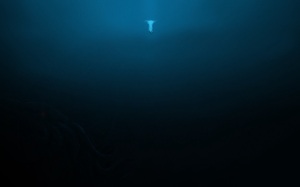 Bonus points from the fact that the end of their “flight” would be dropping into the sea where they’d be devoured by Piranhas before finally being allowed to respawn.

About the only thing they could do for the flight (other than looking forward to the messy devouring by small fish) was inventing new profanities to call me over TeamSpeak.

Kabuto’s end of the island was pretty barren.  He couldn’t build a base and you’d only ever go there if you’d mucked up and needed to respawn.  As it was eerily empty it was brilliant for re-enacting scenes from Halloween.  You could run to that end of the island and ‘accidentally’ drop the player you were carrying (it was pretty believable initially as Kabuto’s controls were absolutely diabolical).  You’d then spin round “not being able to find them” as the victim/ player would start sprinting back to their base.

At that point, the chase was on, normally followed by messy devourment.  You could dial the sadism up to 11 if you combined this with the “Orbital Launch” as above too.

Just like in all the best horror-flicks you wanted them to get so far that they’d start to believe they’d get away but not so far that they actually did.  It was a tricky balance to get right and you couldn’t practice TOO much as people eventually got wise;  after the 50th time they’d suspect it wasn’t really an accident and was really some sick, twisted game.  As if.

My kids were pretty young back then so after I while I turned it into the same kind of hide-and-seek games I played with them; the kind of game where they were ‘hidden’ in plain sight with a towel over their eyes.

“Where has the Mech gone?  Is he behind the hill?”

“Is he behind the one piece of foliage in the entire area?”

Though the games with the kids didn’t end as messily as the ones with Kabuto did….

4 Replies to “LAN Yarns: How To Lose Friends And Ingest People”