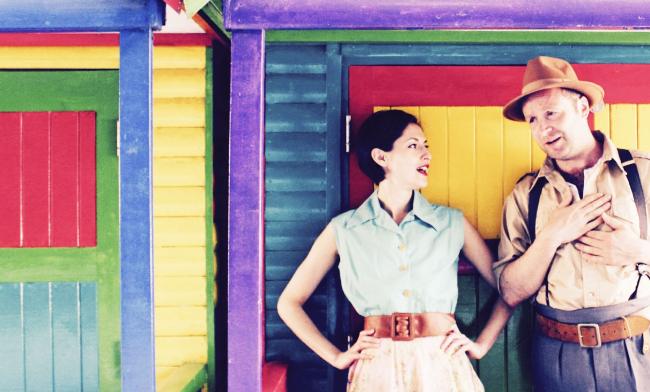 The family and I went to see a great open-air performance of Much Ado About Nothing at Wadham College Gardens, Oxford.  Worth going to see it if you can!Wadham College Gardens was a small park within the college grounds;  it was beautiful and light, while still feeling quite intimate.  We’d got there early enough so we were on the front row of seating which gave us enough time to get settled and soak up the atmosphere.  Only the atmosphere mind though even if I hadn’t been driving a glass of wine or beer from the bar would have been very civilized 🙂

The set and actors slowly merge into the green where the “stage” is, slowly and subtly  enough that I didn’t notice it happening.  It may have been my lack of perception though;  to put it into perspective I once noticed a “new” ornament in our house that my wife informed me had been there for years.

I loved the play;  the actors were often close to or in with the audience and it made the story fantastically engaging.  It was genuinely funny too and Beatrice and Benedict were great.  Hero and Claudio were good too, though I’m getting far more intolerant of youthful self-indulgence over love in plays;  I probably better not go and see Romeo and Juliet or the desire to go and shake some sense into the both of them might overwhelm me.  At least my daughters seem to learn the right lessons with both wondering why the hell Hero would take Claudio back after he’d proven himself such a distrustful, cruel sod.

Most of the play was played light though and all the other characters were funny and engaging.  It was just really vivacious;  one of the best Shakespeare performances I’ve seen.  We all came out grinning!