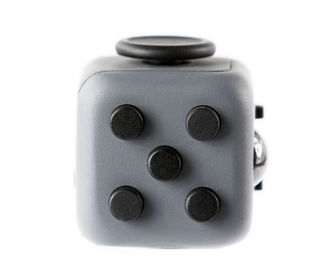 I backed the Kickstarter for the Fidget Cube when I saw it and they finally arrived!

It’s pretty much what it says on the tin;  a cube for fiddling with.  Each side has a range of surfaces, buttons and widgets all of which give lots of satisfying feedback.

I ordered a set of 5 cubes as the whole family was interested + 1 spare as stuff invariably get’s lost / broken / eaten with two kids and a dog.  They came nicely packaged in their own case with some helpful instructions in case you don’t know what you’ve bought or what fidgeting is.

For the Kickstarter you were able to select from various colour options so I carefully checked with the family about what they all wanted before ordering.

That was a few months ago so everyone has both forgotten what they wanted and experienced radical shifts in tastes (teenage children) so the first bit of time was wasted rowing over who got which colour.

Soon though, everyone was at it.

It’s interesting the different approaches to fidgeting;  my wife restricts hers to when she’s at her desk, reading.  I’m similar, though I take mine for occasional walks while I’m thinking about something.  My oldest is slightly more mobile with it as she takes hers to the TV or with her mobile.

But my youngest (already a turbo fidgeter) never seems to put it down.  It’s like being a bat;  you can tell exactly where she is in the house via echolocation, a constant clicking as she trundles about.  It’s a big success with her to say the least.

The size and weight seems just right;  it’s very soothing to use without ever being totally distracting.  I’ve found myself using it when I’m turning over a scripting problem in my mind and it doesn’t get in the way of even thorny problems;  the switches, buttons and dials really are ingrained into your subconscious now by modern living 🙂

It’s really worth a go;  I’m not much of a compulsive fidgeter but now it’s there I really enjoy holding while thinking or chatting on Skype for meetings.