The first full day in California!We managed to make it through to a reasonable bed-time the night before and so I managed to sleep fairly well(with the exception of a flurry of mental activity at 3.30 AM).

A quick Google for a breakfast locations gave us Joanie’s Happy Diner;  I tried a breakfast taco for the first time and it was pretty good.

As we were all reasonably functional we thought we’d hire some bikes and ride across the Golden Gate bridge.  We grabbed the bikes from San Francisco Bicycle rentals;  the staff were friendly and good at getting us going and we were soon off on a route across the bridge to Sausalito

The weather was great, the bridge wasn’t fog-bound and we had a great time.   San Francisco was very biker-friendly so we had no problems at all.

In fact, the only potential issue was because everyone was TOO used to cyclists.  I’d not ridden in over a decade so at first I barely felt in full control;  I was giving vague suggestions of intent to my bike and hoped everything worked out.

The native pedestrians were used to hardened cyclists and made way just enough for a bicycle to pass through in a dead-straight line, foolishly assuming the the cyclist wouldn’t wobble dramatically and take out everyone’s legs below the knee. 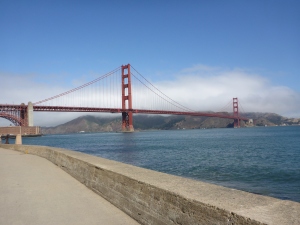 at high-speed down a massive hill after crossing the bridge.  My family watched me zoom off into the distance and worried they were going to find me and my bike embedded in a tree.

After returning the bikes we grabbed a Subway and had a wander around Ghirardelli Square.