I was wrestling with a sticky PowerShell problem the other day and while turning it over in my head I stared at my wall.

Unfortunately, I didn’t get any inspiration.

But I also realised it’s a pretty good snapshot of my level of nerdiness.

A DeathStar!  Made of Lego!  Tiny Star Destroyer there for scale.

A printer.  Unfortunately, still only 2D.  It’s got a gaming chair pillow on it though.

Loads of board games.   These are the ones we play most often.  Roll for the Galaxy is one my friends and I have played a bit recently;  it’s really good.

Books.  A combination of graphic novels, film books, PowerShell manuals and RPG books.  Just out of sight;  Portal themed book-ends;  a present from my daughters 😀

There’s a Google Cardboard in front too being kicked my a mini- Lego AT-AT.

War of the Ring Game, Collectors Edition.  This looks so awesome (it’s a replica Elvish book made of wood).  The game’s pretty good too.

More cool bits.  A cup painted by my daughter, a Lord of the Rings – themed goblet and a Jack Skellington mug.

More games.  Nestled between all the new-style games is a set of cards from Pictionary.  I’ve had that set since I was a student….

A VR Lighthouse.  It’s kind of cool that I’m constantly bombarded with lasers.

A Ghost!  Blinky in fact.  Just out of shot;  Pac Man chasing them.  Part of a present made by my youngest.

A Friendship bracelet also made by my youngest.

The top shelf.  From left to right; 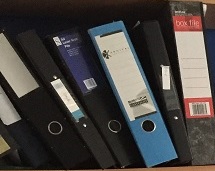 Work Stuff.  Not very interesting.  But pays for the other,  Cooler Stuff 🙂