Hi.  I’ve written a few scripts that have gotten to be quite large.  In all cases they’ve needed to make a series of changes to a set of objects and log the results.  It’s normally important that some of the later changes only get made if the earlier ones are successful;  for example only changing the default SMTP address on a mailbox if another SMTP address was added earlier.

This series of posts will go into a decent system I’ve found for accomplishing this with some skeleton examples that are (hopefully!) easy to adapt.First, I’ll list the things that are normally important;

These can be applied to all sorts of sets of objects;  mailbox changes, AD updates, text updates to a file, server configuration etc. 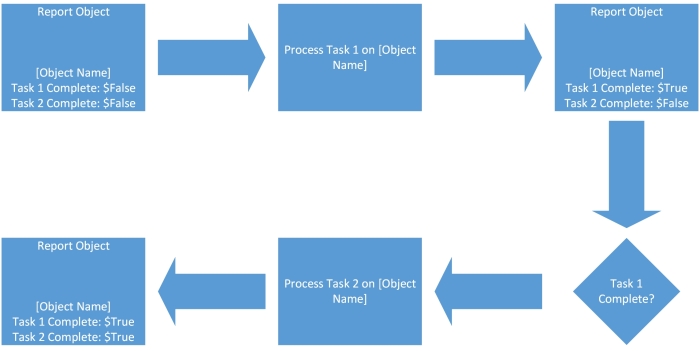 At the end, you can use the set of processing objects to generate a report.  Additionally, you can dump the reporting objects to disk at various points so you get a ‘point in time’ save of what the script has done (in case the processing terminates early).

The reporting object function needs to create a new report object that holds an identifier to the thing we’re going to update and the success of every operation we’re going to run on it.  Additionally maybe a note about any failures that occur.

This creates a new ReportObject with an Identifier field, two “Task Complete” boolean fields and a Note field.  If a TargetObject is passed it populates the Identifier with a unique representation of the object we’re going to make changes to.  Here I’ve assumed it’s going to be a mailbox so I’ve used the DistinguishedName but you could use anything (SamAccountName, UPN, a unique key etc).

The function accepts input from the pipeline.