After many restarts and dismal failures I did it ;  Legendary Ironman XCOM 2 complete!

It’s a lot of fun;  you always feel you’re close to death (at least at the beginning of the game) and the tension really gives you that “against all odds” vibe.  I’ve collated some tips to help you retain some sanity when you start Operation Gatecrasher for the tenth time.

Also here’s a guide for War of the Chosen (the latest XCOM2 expansion).

Rule 1: RNG is not your friend

I remember reading in one of the old AD&D manuals about how generally the players are stronger than the monsters and so anything that increases randomness makes the game harder for the players.

This applies strongly in XCOM 2.  You never want to be relying on a random chance to save your bacon as that 10% chance to fail occurs 90% of the time*.

*may not be based on real statistics

So focus on things that give you guaranteed results (or as close as XCOM gets).

Rule 2: On the strategic layer, you’re fighting the next battle, not the current one.

Everything takes ages to research, develop and build in XCOM;  this applies especially on Legendary where the pace is slowed down further than normal.  With a couple of exceptions (like building a new item in Engineering) you need to be planning waaaay ahead for the next big spike in difficulty.  There are multiple paths to avoiding catastrophe but you need to commit to one and get cracking in time to make it. 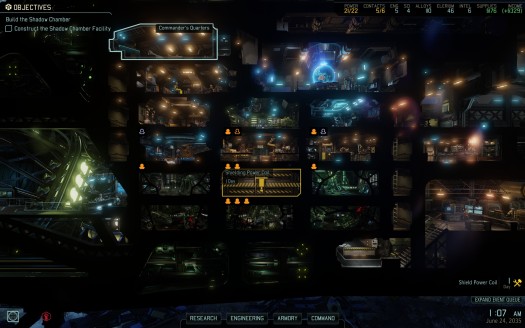 A bit of flexibility can help though;  if you find a cache of weapons with a great experimental ammo type in it or get a great hack bonus (like 50% reduction in research) then your plans might change.  Ideally you want to be planning for the best outcome but have a mitigation for the worst (“I focussed on my sharpshooters and now all my snipers are in the hospital as apparently sandwich vans are stuffed with TNT.”)

So bearing the above in mind, I found the following got me through the game.

You want a Phantom Ranger ASAP.  Even with the troops you start with (combat effectiveness rating : blancmange) you can normally take on a pod of aliens with little risk but if you trigger two groups you’re pretty much dead (Mimic Beacons not withstanding).  A concealed ranger stops that happening (at the cost of an active soldier).

Grenadiers all the way.  Thinking about Rule 1, grenades give both guaranteed damage AND strip cover away giving you as close to sure shots as you’re going to get.

Specialists with Combat Hacker talents.  Combat Protocol: Guaranteed damage!  Scanning Protocol:  More information on the tactical map!  The medic tree is good but if your guys get hit they’re wounded for so long that they’re no good to you.  Better to avoid the damage in the first place.

Of course get as many Psi Operatives as you can field (as long as they have one of the key talents).

Through the early stages of the game I had 1 Ranger, 1 Specialist, 1 Sharpshooter and 2-3 Grenadiers.  If it was a raid / non-timed mission I took an extra Sharpshooter instead of a Grenadier as I’d have more chance of loot if I didn’t carpet-bomb everything.

Further in I took an additional Ranger instead of a Grenadier.

And for the final missions I went with 2 Psi-Operatives, a Ranger, a Sharpshooter, a Specialist and a Grenadier.

Psi-Ops: You can get as many as you like but you definitely want Stasis, Inspire,  Domination, Null Lance and Void Rift.

Again these all revolve around Rule 1;  guaranteed damage, information gathering and general improvement to your odds.

For the later stages of the game I changed the talents on my Grenadiers to take Hail of Bullets and Rupture.  Grenades were less vital and the final mission is a slug-fest that goes on for ages;  you want non-limited abilities if possible.  Plus the whole ‘never miss’ aspect to Hail of Bullets really helps with certain late-game enemies…

Perception (Aim) all round with two exceptions;  Mobility on the Rangers (for those beautiful flanking shots with Hunter’s Instinct and for good scouting) and Conditioning on the Psi-Operatives (as they’ll never sully themselves with something as mundane as using a gun or moving about).

Mimic beacons are still godly.  As long as you throw it carefully it means 2, maybe 3 aliens ignore you, once.  Which bails you out of trouble more often than you think.  I took 2 or 3 along until the end of the game.

Battle Scanners give you more information and help you not get ambushed.

Acid Grenades do guaranteed damage over time and strip armour.

Flashbangs stop aliens using non-basic attacks and abilities.  Use them to break mind-control and stop creatures meleeing too.  There are lots of creatures with very annoying abilities that get totally shut-down by these…

Get the Guerilla Tactics School up asap and the Advanced Warfare Centre soon after that (you need to research Alien Biotech before you can).  These are critical.

After that, I got a Power Relay followed by a Workshop.  I placed the Workshop so it could run the Power Relay and the next two facilities I put down;  Resistance Comms and The Proving Ground.

If you get that far, then it doesn’t matter too much.  I went straight into the Psi-Lab.  A lot of people swear by getting a Laboratory but I never needed it to get research done on time.

The Squad size upgrades are critical force multipliers.  Vulture is also really good;  extra weapon modules either give a power boost or free money.  Hunters Instinct is the other critical upgrade from the GTS;  the extra damage made a big difference, especially on crits.  Again, I never bothered with Wet Work and all my soldiers (bar 1) maxed out their levels by the end.

Plasma Grenade and Advanced Explosives maximise your grenadiers.  Experimental Ammo and Grenades are also a big force multiplier;  Acid Grenades and Talon Rounds are the ones to really go for.

I did make a Wraith suit for my Sharpshooter which was fairly useful.  Not critical though.

The initial order I used was;

The drive with these was to the Advanced Warfare Centre unlocked ASAP and then to get Battle Scanners before the first retaliation mission.  After that the focus was better guns (with a diversion to unlock the Mimic Beacon).

Don’t fight more than one group at a time;  if you’re unsure of your surroundings, don’t reveal unexplored space on your move.  This can be tricky but as long as you’re careful with your grenades you can fight where you stand.

Try and get a concealed Ranger ahead so you know you’re safe to flank;  it makes life a lot easier.

When you are concealed you can only see the squares that will reveal you if you can see the unit that is spotting them.  This is important if you move straight round a corner where you reveal an alien close by and it immediately sees you;  you didn’t see the squares it was watching until it was too late.  When scouting get into the habit of ‘swinging wide’ around blocked line of sight.

A similar thing can happen if you move a concealed unit to the edge of a rooftop and get spotted by  a hidden unit against the wall below.  I always kept a scout on the ground to look for aliens (or hostile civilians) flush to a wall before moving the troops on the roof.  Battle Scanners can be used to do the same thing.

If all goes well you should be able to take 3 or 4 advantageous fights;

When things go wrong you can make a fight advantageous by using a Mimic Beacon.

Finally don’t sweat bad luck;  it happens.  You don’t need perfection to win.  I was really unlucky with all the random AWC upgrades on my troops; all of them were useless bar one.  They were still awesome by the end of the game….